Songwriting Template: How to Write a Hit Song 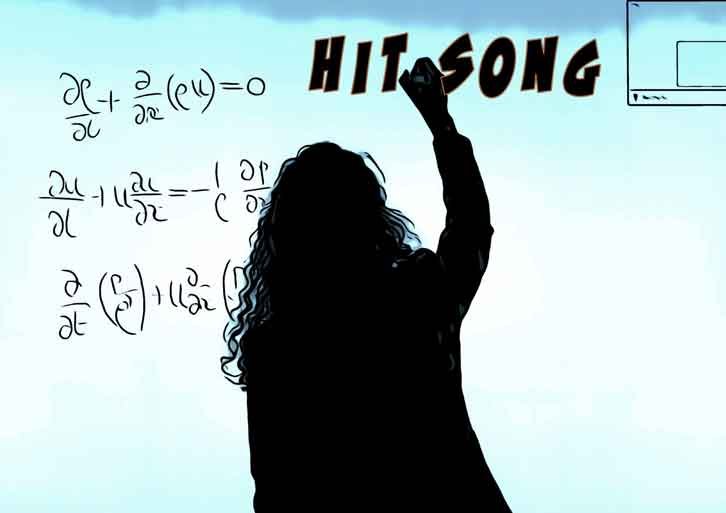 To come up with this year’s songwriting template we deconstructed the top 50 songs on the Billboard charts for last year.  So here it is, the latest template for how to write pop songs.

See here, for all our ideas on songwriting.

The first chorus has to come within the first 30 seconds.  Also, end with the chorus.

Eb major or f# minor would be preferable keys to use.  Whatever you choose, a minor key is preferred.

Do not alter the harmonic progression in any way. The exact same chord progression should be used throughout the track.

Should revolve around love or how awesome you are.

Should include rapping and singing.  Singing preferably obviously auto-tuned.

CHOOSE CANDY OVER KALE: HOW TO WRITE POP SONGS

If you’re trying to write a hit song, you need to know what the familiar sound is. Today, it’s not as easy as it once was. The popular sound is shifting.

Today, there’s a wider selection of artists on the charts than ever before.  The selection includes a wide array of languages and musical backgrounds.

The Billboard charts are now a global equation.  The way music is distributed through streaming platforms, YouTube, and social media has altered the landscape of the charts.

Billboard started including streaming data into its calculations in 2014 and now includes YouTube views as well.  This has all contributed to a more diverse popular sound with a wide array of cultural and musical influences.

So let’s explore what that sound is.

The Sound of Machines

Listeners are not the only people who prefer ease over effort, so do artists.  In most cases, it’s easier to make music with a computer than it is to learn to play an instrument.  As more music is made by machines, the more it becomes a familiar sound, and therefore more popular.

For better or for worse, all aspects of these 50 tracks show ample evidence of this machine-sounding trend.  The choice of key is more random, less decided by how fingers fit on a keyboard or fretboard.  Almost all of the songs use synthesized rhythm tracks with auto-tuned and vocoded vocals.

The dominant genre is clear: Hip-hop.  These 50 tracks are no exception.  The 44% in the Rap, Hip-hop category account for songs that were only hip-hop.  Most of the mixed genre category is also hip-hop but these songs included elements of other genres like RITMO by the Black Eyed Peas featuring J Balvin or Ballin by Mustard featuring Roddy Rich.  Furthermore, much of the Pop category includes hip-hop influences.

Genre of the Top 50 tracks

For your pop song template, the key is not so important.  It seems the choice is mostly based on the vocal range of the singer.  As you can see from the pie chart below, pretty much all the bases are covered on the choice of key in these 50 tracks.

Roughly half of the tracks are in major, half in minor.  But, if you write a hip-hop track, the most popular genre, it should be in a minor key.  15 of the 22 hip-hop tracks were in minor keys.

For what it’s worth, the most popular keys were Eb major and F# minor.

Key of the Top 50 tracks

The clear rule about the chord progression is this: use four chords or fewer and don’t vary that progression at all.  41 of the 50 songs have this trait in common.  Chorus, Verse, Bridge, Second Chorus, Pre-chorus – no matter what is happening in the overall structure of the song, we have the same (usually four) chords, in the same order.

Number of Chords Used in the Top 50 Tracks

Beyond this rule above, the world is your oyster in terms of chord progressions.  As more global styles merge on the charts, so does harmonic variation.  The most famous chord progression in pop music history, beginning on the tonic, is only used twice in the 50 songs.

(Note: I will use Roman numerals or Nashville number notation so that we can compare chord progressions across different key signatures.  Uppercase indicated Major (I), lower case indicates minor (i).)

It is used in the following songs:

Someone You Loved, Lewis Capaldi

That being said, three other songs use these four chords in a different order.  So it’s reasonably safe to say, this is still the preferred progression.  These are the four chords discussed in Axis of Awesome’s video below:

The other progressions that are used in more than one song are:

In these 50 songs, there’s not an obvious preference as to how you get back to the tonic.  In the pie charts below, you can see that in all the progressions used, the way the harmony is resolved varies quite a lot.  “Typical” V – I or V – i resolutions are less common than IV – I or VII – i.

How they resolve: Top 50 songs

Seven of the tracks avoid playing the tonic in the supporting harmony altogether.  It’s almost as if playing the actual tonic chord is too obvious for them.  Instead, they use chords that spell the tonic with an extra third like VI7 in minor (Everything I Wanted, Billie Eilish ) or they give it a different function like V7/IV (Blueberry Faygo, Lil Mosey)

See here for ideas on chord progressions and creating your own songs.

Themes in the Lyrics

If the top 50 tracks of last year are to decide our theme, love is still king.  Particularly, the direct “I adore you” theme is dominant.  Other love themes, “we’ve gone through tough times, but I still love you”, “I hate you so much that I love you”, and “I miss you” are also prevalent.

But love is not the only thing you can talk about.  The subject of “Me” is also really big.  Particularly, songs where you discuss how rich you are, how cool you are, or how awesome you are in bed.  For some reason, this riveted listeners last year.

Also worth noting, gone are the days when songs at the top of the charts needed to be PG-rated.  Anything goes in these 50 tracks.  Long monologues about sex and the nether regions are absolutely commonplace.  WAP by Cardi B and Megan Thee Stallion; Savage by Megan Thee Stallion featuring Beyonce; and Go Crazy byChris Brown featuring Young Thug all show us this trend.

There was also a surprising thematic exception in these 50 tracks. Songs about death are more kale than candy; so, they are not usually at the top of the charts.  But Powfu’s Death Bed, a love song about death, still came in at number 43.

Themes in the Lyrics of the Top 50 songs

The songs in the top 50 average out at a total length of 3 minutes 16 seconds.

The length of a hit song sitting around three minutes goes way back to the days of the 10 inch single, also known as the 45.  Technology made the rules.  A 45 could only fit around 3 – 5 minutes of music.  The longer the song, the closer the grooves on the record needed to be to each other.  A longer track meant lower quality sound.  Hence, the three-minute single.

Technology continues to make the rules.  The new rule is, get your hook or chorus into the first 30 seconds.  With streaming now the most popular choice among listeners, artists receive credit for a stream only if the listener stays for 30 seconds.

For your songwriting template, get ‘em hooked.  Keep them for 30 seconds.  30 seconds is just as good as 8 minutes.

There’s no incentive for a longer track.  The average Billboard hit song is now 20 seconds shorter than it was five years ago.  If a hit song is your goal, you might not want to release the next Stairway to Heaven (8:02!).  And a long atmospheric intro is a sure way to economic ruin.

The most popular structure is some version of this:

To be more specific, 6 of the 11 tracks that use this form, use a classic pre-chorus.  This is the section that’s usually supposed to pump you up before the chorus kicks in.  It looks like this

The runner-up for song structure is:

Around half of the tracks begin with the Chorus.  This is surprising, given the 30-second streaming rule.  One clear rule among these tracks, however, is that you end with the chorus. Only five of the 50 do not end with the chorus, the exceptions mostly having significant outro sections  or they are Billie Eilish.  She ends on both of her top 50 tracks, Bad Guy and Everything I Wanted with the Bridge.

The songwriting template this year should be up-tempo. 39 of the 50 songs keep things moving at a fast tempo.  Of the ballads, only 2 tracks are truly slower in tempo, the rest are either your typical power ballad or they are EDM house tracks.

The typical beats used by Trap, the sub-genre of hip hop known for its use of complicated high hats and tuned kicks with a long decay, is the dominant rhythmic style for the beats of these 50 tracks.

22 of the 50 tracks belong clearly to the Rap, Hip-hop genre.  19 of those use a Trap style beat.  Based on these results, it would appear that in 2021, trap is not really a sub-genre anymore.

Because people usually want to hear what is familiar to them, the songs at the top of the charts move toward sounding like each other.  Hip-hop is the dominant genre, so now country musicians, traditional pop types, and everybody else is rapping.  And it goes in the opposite direction as well, rap moves toward sounding more like traditional pop.  Rappers are now singing.  Well, singing with auto-tune.

So the songwriting template is rap and sing.

This Site is Reader Supported

©2022 The Greatest Song, All Rights Reserved